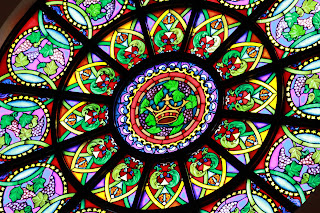 The man and I drove all night and made it to our fantasy home away from home; the land of the mouse. A place where adults can be kids, when their children aren't looking.

Anyway, we arrived tres early and the husband asked, "What do you want to do?" My reply, "Well find a church, and go to Mass." After all we had just had a successful 23 hour road trip, and there was plenty of time to spare before check in.

So pull out the Garmin and search: Catholic church. And sure enough in Orlando there is a cathedral. Oh, to go to Mass in a cathedral; wouldn't that be nice. So heading off into the humid early morning wild blue yonder, we went on the hunt. And we thought we found it, but it was under a lot of reconstruction. As we drove around the corner, we spotted another cathedral, or was this the right cathedral, The Cathedral of St. Luke, complete with crucifix. So I said, "I'll go to that church."

It was 8:10 AM, Mass was listed to start at 8. I'd be fashionably Catholic late, but sitting in the back; no worries. I tried to slip in unnoticed. The door wouldn't budge; but a nice gentleman opened the door from inside, and welcomed me with a smile.

The cathedral was beautiful. Huge stone pillars lined the way up to a very ornate altar. The priest was giving the homily... boy did he rush the first part of Mass. I sat down and listened. He spoke of faith and how we can never impress God with our acts of kindness. But with the faith the size of a mustard seed and God's good grace, we could work miracles. Lovely concepts...

Before the gifts were brought up, the priest asked if there were any visitors. The man who opened the door for me smiled and urged me to raise my hand. The Cathedral had a gift bag for me and the other visitors. How sweet. I would bring it back and share it with my religious ed class.(Inside besides a couple of cookies, was a pocket cross and some info on the parish.)

During the Mass, I noticed a few differences between this parish and ours at home. The prayers were worded a bit different. The parishioners said them slowly, really pausing after each phrase. There were women on the altar that appeared to be deacons. The altar servers were all older young men. The sign of peace came after a prayer over the entire parish for the forgiveness of our sins. The Eucharistic prayer seemed the same, until there was some mention of the Archbishop of Canterbury... Was Canterbury some place in Florida that I was unaware of? Then Communion was very different, for it elicited no Amen for a response, and the parishioners knelt at a railing.

After the recessional, I shook hands with the priest, and thanked him for a lovely service. He responded saying he was delighted to see me. And I thanked the man who opened the door for me. Explaining we had just driven down from Massachusetts and truly I wished to attended Mass. He smiled. And as I walked out I reread the small print under the Mass schedule and clear as day was the word: Episcopalian. St. Lukes is the Cathedral of the Episcopalian Diocese of Central Florida.

Upon my return to my husband,who so graciously waited for me in the car, I explained to him my religious educational experience of the day. He laughed and said, right after I trekked off to St. Luke's a crowd of people came out of St. Joseph's school (next to the Catholic Cathedral.) He assumed due to reconstruction they had moved the Mass. Where I had assumed I had misremembered the name... 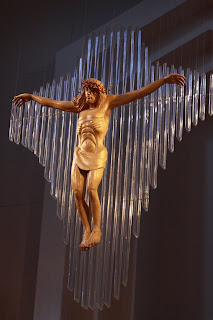 Putting icing on the day's cake, as we were looking for a gas station we saw a sign for Shrine of Queen Mary. And thinking: Queen who? I proposed it could be Mary Queen of Scots... but why here in Florida? Seeing the shrine was a church I asked the man to let me off so I could go investigate. Jumping out of the car in the quick drop area, I hit the ground with a run. 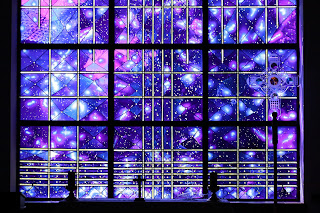 The shrine is to the Queen of Heaven, Our Lord's Mother. It is a beautiful church with several chapels, inside and out. I quickly did a tour, said a prayer and made my way out to the parking lot to find the man. He had found a spot in the shade and urged me to go back with my camera this time and get some shots. So taking a more leisurely stride, I took a second tour around.